Better visit your aging parents if you live in China. (It’s a good idea here, too) 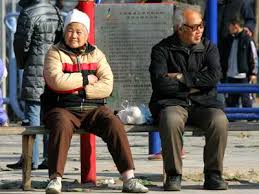 China has a long history of respect for the elderly. An adult child who fails to care for his parents violates a key teaching of Confuciansim. And soon, inattentive children may face more than moral reprobation: their credit scores may be downgraded.

The Financial Times reports that Shanghai has introduced a new ordinance, Regulations Safeguarding the Interests of the Elderly in Shanghai, enabling a parent to sue an adult child who fails to visit regularly. If the parent prevails, the court can order the child to look in on his/her parent. If the child does not comply, his/her credit rating can be downgraded, making it more difficult to get loans, open bank accounts, even secure a library card. The ordinance goes into effect May 1.

Beyond the moral considerations, Shanghai has practical reasons to be concerned with the welfare of its elderly residents: Those 60 and older now comprise 30% of the city’s population, and that percentage is expected to increase. After decades of China’s one-child policy, most elderly citizens have only one child to rely upon. And rapid industrialization has resulted in increasing numbers of adult children living far from their parents’ homes. Like their Western counterparts, China’s adult children often find they are just too darned busy to visit.

Clearly, Shanghai is not buying the “I’m too busy” routine. It’s putting the legal screws to the kids in hopes of forcing them to take more responsibility for their parents’ welfare. In fact, the official China Daily newspaper recently equated the inattentiveness of adult children to the reckless disregard of hit-and-run drivers.

If it goes as planned, many of those too-busy adult children will be forced to find the time to look in on Mom and Dad.