The story of two wills, one eaten by the dog 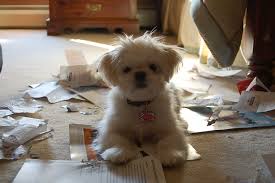 The dog ate my homework! That time-worn excuse usually gets an unprepared student an “F”. But suppose Rover isn’t interested in your homework, but in your last will and testament? That could result in an “L” – as in lawsuit.  And that’s just what is happening now in a case in Bexar County, Texas, as reported in the June 4  San Antonio Express.

Two competing wills, one original, the other a copy

Billie Ray Hood died on February 19, 2014. Her husband Jack survived her, and died five years later. A debate over Billie’s estate is now ongoing, fueled by the fact that she left behind two separate wills: one executed in 2003, and another executed in 2009. Complicating the situation is the fact that the 2009 will is a photocopy, because the original really was eaten by the dog.

The first of Billie Ray’s wills was written in 2003. It left everything to her husband (who is not the father of her own three children). Billie Ray wrote a subsequent will in 2009 that left all her assets to her three children. The 2009 will was given for safekeeping to Attorney William Leighner, who kept it in his den. But Leighner’s dog, Linus, had other ideas. He got into the den, snatched the 2009 document and dragged it into the backyard. After he was done, all that remained was half of the first page, and a few fragments of pages 2 and 3.

A copy of the 2009 document exists. However, Jack’s daughter, Jerline, is alleging that the copy should not be admitted to probate. She asserts that her stepmother was not mentally competent to create a new will in 2009, and did so only because of undue influence from her three children, who wanted her to change the will to favor them. She claims it is the 2003 will, the one that leaves everything to her father, that is the legitimate document.

Can a photocopy of a will be admitted to Florida probate?

What happens in Florida if your original will has been destroyed – by a dog or any other means – or simply cannot be found? In this state, the presumption is that the testator intended to destroy the original will. It may be possible to probate a copy, but evidence has to be presented to rebut the presumption that the will-maker wanted it destroyed.   Among other steps, a disinterested witness must testify that the copy is an accurate duplicate of the original. All  individuals who would receive an inheritance if the photocopy were not probated must be notified.

As for the Billie Ray Hood case, we have to wait and see. The case will soon go before Bexnar County Probate Judge Oscar Kazen. For the rest of us, the takeaway is clear: Safeguard your original will…and keep it away from the dog!