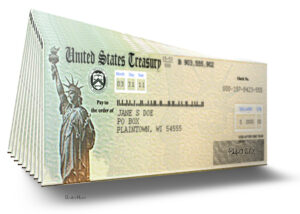 With inflation on the rise, it looks like retirees are going to get a hefty Social Security Cost of Living Adjustment in 2022. The latest consumer price data would put the increase at 6.1%. This follows many years of paltry increases that barely allowed retirees to keep up with inflation. According to the Senior Citizens League, the 2022 COLA would be the biggest increase since 1983. However, the final, set-in-stone percentage will not be announced until October 31.

Not to look a gift horse in the mouth, but various advocacy groups have long pointed out that COLA adjustments would be more fair to seniors – and usually, larger – if Social Security revamped the method it uses to calculate COLA. Let’s drill down.

Currently, the annual COLA is based on the Consumer Price Index for Urban Wage Earners and Clerical Workers, or CPI-W. This index is pegged to what that demographic pays for an average basket of goods and services. Critics say that’s not the basket Social Security should be using. Why? Because it does not reflect most retirees’ spending habits. For example, apparel, education and gasoline, significant items in the CPI-W basket, are generally minor expenses for the average senior.

Instead, advocates for seniors are pushing for Social Security to adopt the CPI-E, the Consumer Price Index for the Elderly. This index is pegged to a basket of goods and services more heavily weighted toward seniors’ expenses, including health care costs that historically have outpaced inflation. Here is a chart from The Senior Citizens League reflecting the difference between COLA adjustments based on the CPI-W, and what the adjustments would have been if based on the CPI-E: 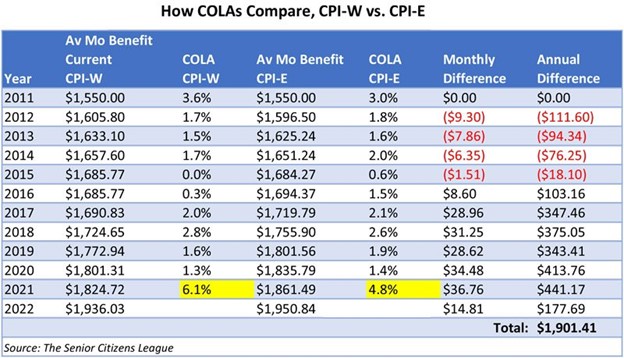 In July, the Fair COLA for Seniors Act was proposed by Rep. John Garamendi, a Democrat from California. If passed, it would link COLA adjustments to the CPI-E index. The likelihood of the legislation passing this year is doubtful at best. This is not the first time efforts have been made to use the alternative index. You can read the proposed legislation here.

Ironically, if the CPI-E was used to calculate this year’s COLA, the benefit would actually be smaller – but only because this is an unusual year of high inflation. If the Social Security Administration continues to use the CPI-W for its calculations, seniors could be back to stingier cost of living adjustments once inflation settles down.

Whatever happens, enjoy this year’s COLA.