Our WASP’s are veterans, too! 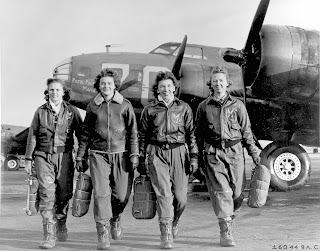 One of our firm’s longstanding clients proudly served as a WASP – a member of the Women Service Airforce Pilot corps  – during World War II. She and more than a thousand other women flew and tested military aircraft, towed gunnery targets and transported military personnel around the country, thereby freeing up male pilots for combat missions. Although their roles were considered to be non-combat, 38 WASP’s died in the line of duty.

Despite their bravery and sacrifice, the military regarded the WASPs as  civilians, not bonafide military personnel. When the WASP’s were disbanded right before the war ended, these women returned home without any of the benefits afforded to other G.I.’s:  No medical benefits. No gold stars. No military funerals. The military did not even pay to ship home the bodies of the 38 WASP’s who perished.

For decades, the WASP’s fought to be recognized as military veterans. Finally, in 1977, President Carter recognized them as such. And in 2002, they got the right to have their ashes interred at Arlington National Cemetery.

Today, there are 138 living WASPs. Unfortunately, these brave women, my client included, were dealt another blow last year, when then-Secretary of the Army John McHugh reversed policy, saying WASP’s would no longer be permitted to have their ashes interred at Arlington. He indicated that Arlington is running out of space, and that the WASP’s were not considered military personnel during the actual course of the war.

In response, a bill has been introduced in both the House and the Senate that would restore the WASP’s right to be inurned in Arlington. One of the bill’s sponsors, Senator Barbara Mikulski (D-Maryland) has said: “If they were good enough to fly for our country, risk their lives and earn the Congressional gold medal, they should be good enough to be laid to rest at Arlington Cemetery. This legislation will right this wrong.”

I agree. If you do, too, please let your U.S. Senators and U.S. Representatives know you want them to support the bill, formally known as the “Women’s Air Forces Service Pilot Arlington Inurnment Restoration Act.” You can read the text of the bill here. Find and contact your Senators here and your Representative here.

Read the fascinating history of the WASP’s  here.