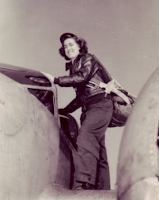 The Women Airforce Service Pilots helped the United States win World War II. More than half a century later, they have won another battle.

As we reported in February, the WASPs flew many non-combat missions, freeing up male pilots for combat.  WASPs flew every type of military plane, tested out newly overhauled aircraft, and transported personnel and equipment. Thirty-eight women perished in service to the country. Notwithstanding their contributions, these brave women were classified as civilians during the war. It was not until 1977 that they were officially recognized as veterans, a status which also gave them the right to have their ashes placed in Arlington National Cemetery. That is a final honor many WASP’s and their families feel they deserve.

Unfortunately, in 2015, Army policy changed and deceased WASPs could no longer be interned at Arlington. The policy change did not sit well with the WASPs, who began fighting for the policy to be reversed. An online petition got more than 178,000 signatures.

Now the WASPs can claim another victory: Congress just passed a bill that will restore the WASPs’ right to have their ashes placed in the hallowed ground of Arlington National Cemetery. The bill is expected to be signed by President Obama. How fitting that we are honoring these women just as Memorial Day approaches, when we remember with reverence and gratitude all our deceased war veterans.

Veterans are entitled to all kinds of benefits, which as it should be. Elderly and disabled veterans and their widows may be eligible for Aid and Attendance benefits to help cover the cost of nursing home care, assisted living or home care. Click here for more information.