Tranquility Base Landing For The Aldrin Family 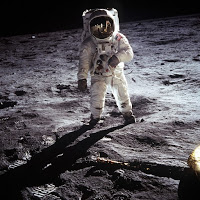 Buzz Aldrin became the second man to walk on the moon when the Apollo 11 lunar module landed gracefully in the Sea of Tranquility. But in recent years, Aldrin’s relationship with his children has been anything but tranquil.

As noted in our July 2018 post,  two of Aldrin’s three children and his business manager had alleged that the 89-year-old former astronaut was suffering from Alzheimer’s Disease and incapable of handling his own finances. The children sought guardianship over him. Incensed, Aldrin sued them, accusing them of elder exploitation and mismanaging his businesses, the Buzz Aldrin Space Foundation and Buzz Aldrin Enterprises. He claimed his son Andrew had stolen half a million dollars from him.

Then, in March 2019, the feud – at least the public legal wrangling – came to an end. Family members announced that they were dropping their respective lawsuits and were committed to working out their conflicts privately. And the timing could not be more appropriate: 2019 marks the 50th anniversary of the moon landing, and there are many commemorative events on tap that Aldrin and his family will participate in. They want those events, not the family’s legal woes, to take center stage.

Said Aldrin of the end of the legal conflict: “This was the most charitable way to manage a difficult situation, as this year…is too important to my family, the nation and me.” His children, Janice and Andrew, echoed that sentiment: “We are pleased to confirm that the legal proceedings for guardianship as well as civil actions have been dismissed by members of the Aldrin family. We truly appreciate the support we have received from so many and ask, again, for your understanding and respect as we continue to work through this as a family, in a private manner.”

By the way, if you haven’t yet done so, see the movie Apollo 11. The filmmakers have cleaned up the fuzzy footage of the 1969 event and it feels like you are seeing this wondrous event for the first time!