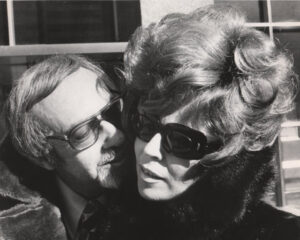 Burton Pugach and Linda Riss’ life together is a bizarre saga that captured public attention years ago. Consider the title of the 2007 documentary about their relationship: “Crazy Love.” Pugach’s recent death, allegedly while he was being abused and coerced into changing his estate plan, is now generating fresh headlines.

The story begins in the 1950s when New York attorney Burton Pugach became romantically obsessed with Linda Riss, a Bronx secretary. When she learned he was married, she dumped him and became engaged to another man. Infuriated, Pugach vowed that if he could not have her, no man would. In June 1959 he hired a thug to pose as a messenger and go to Riss’ home. When she opened the door, he threw lye on her face, blinding and scarring her.

Pugach served 14 years in Attica for his crime, but life behind bars did not diminish his “crazy love.” He wooed Riss through an avalanche of letters. “Despite what I did, you will never find a man to love you more than me,” he wrote in one. He was released from prison in 1974. Because a restraining order prevented him from seeing Riss in person, he proposed to her on camera during a live television interview. In perhaps the most bizarre twist of all, Riss accepted his proposal. Their marriage lasted 39 years until her death in 2013.

Elder Abuse Alleged As A Factor In His Estate Plan

After Riss died, Pugach changed his will several times, but his beneficiaries always remained the same. The bulk of his assets were earmarked for the Burton and Linda Pugach Charitable Foundation, providing assistance to the visually disabled, with smaller amounts going to three friends. However, when the elderly Pugach became intensely interested in and dependent upon another woman, all that changed.

The other woman was Sheila Frawley, whom Pugach met in 2016 while both happened to be dining at the same restaurant. She was much younger than he, a wife and a mother. She and Pugach developed a close relationship, with Pugach’s friends reporting that he was “smitten” with her. When he suffered a stroke in October 2020, he moved into her home. She was his caregiver for three months until he passed away at age 93.

While living under Frawley’s roof, Pugach executed yet another will, which was to be his last one. He used a new attorney to draft it. It left Frawley his entire $15 million estate.

Now cut out of the will, Pugach’s three friends were suspicious. They went to court, claiming Frawley had coerced the frail and vulnerable Pugach into changing his estate plan. They also claimed she had abused him and hastened his death by denying him food and medicine. One of Pugach’s former attorneys who had observed him at Frawley’s home corroborated their allegations, stating that Pugach was “susceptible to undue influence in that he was isolated from his friends and dependent on her for his meals, medication and personal hygiene.” He also noted that Pugach referred to Frawley as “mommy.”

The court issued a temporary injunction prohibiting Frawley from withdrawing the funds Pugach left her. A hearing was held on the matter on January 13, 2021, but we do not yet have a ruling.

Protecting Loved Ones And Yourself From Elder Abuse

The allegations against Frawley have yet to be proven in court. That said, there is no doubt that Pugach, frail and cut off from everyone except Frawley, was the perfect prey. Social isolation is a potent factor in abuse cases. A bad actor always seeks to separate the potential victim from friends and family who might notice that something is awry. This is why visiting and checking up on your elderly loved one is one of the most effective ways to protect him/her from elder abuse and exploitation. If you cannot visit in person, enlist others – other family members, neighbors, community resources – to participate. A variety of community services that can provide support for your elderly loved ones can be found at the U.S. Administration on Aging’s Eldercare Locator website.

If possible, encourage your loved one to relocate from an isolated environment to a more communal environment – assisted living or independent living . Just knowing that there are others around, keeping an eye on the situation, can deter a would-be abuser, be it a caregiver or newfound “friend.” If Frawley did in fact set out to manipulate Pugach, doing so would have been far more difficult had he not been so socially isolated. If you are concerned about your own vulnerability to coercion as you grow older, consider planning on a living situation in which other people will be around you.

Also, there are legal steps you can take to ensure that in the future, you will not be coerced into changing your estate plan. One such step: establishing an irrevocable trust and naming a corporate trustee to manage the funds. If the value of your estate does not justify the fees of a corporate trustee, consider establishing a trust and naming a co-trustee to serve along with you. Your co-trustee could be a trusted family member, your lawyer, your accountant. You can also build into your trust a variety of provisions that will prevent it from being amended, or the beneficiaries changed.

Unfortunately, the elder abuse and coercion Pugach seems to have endured are not uncommon. According to the National Council on Aging, one in ten Americans age 60 and up has been subjected to some form of elder abuse, with some estimates ranging as high as 5 million elders abused in some fashion each year. It may be difficult to have much sympathy for Pugach, considering his unspeakable crime. Nevertheless, his final chapter offers valuable lessons about protecting ourselves from abuse, and the value of a creating a well-thought-out estate plan that minimizes the chances of your being abused or subjected to undue influence.