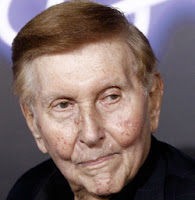 It’s been as much a Shakespearean tragedy as a legal battle over an elderly billionaire’s assets. The story features power grabs, on-again, off-again lovers, betrayal, and money… lots and lots of money.

In my post of 2016 I described the first act of the drama: Media tycoon Sumner Redstone’s relationship with Manuela Herzer, four decades his junior. Since meeting her in 1999, the now 95-year-old had lavished  gifts on her totalling in the millions. In 2015, as Redstone’s health continued to fail, she was living in his Beverly Hills mansion. He had named her his health care decision maker. She was also included in his estate plan, set to receive $70 million and the California house. Forbes estimates Redstone’s worth at $4.5 billion.

Act Two opened in October 2015. That is when Redstone suddenly ejected Herzer from his home and cut her out of his estate plan. He replaced her with his daughter, Shari, as health care surrogate. Shari effectively began taking increasing control of the business, National Amusements, a national theater chain that owns Viacom and CBS.

Herzer did not go gently into the night, however. She launched a series of lawsuits to reclaim her role as health care surrogate and reclaim her expected inheritance. She alleged that Redstone’s daughter and his nurses had conspired against her, and that Redstone was competent when he created his estate plan and named her his health care surrogate. Redstone countersued, alleging elder abuse and claiming Herzer had attempted to isolate him from his family in order to bilk him out of his fortune.

A slew of litigation ensued since then. As the legal wrangling unfolded, Redstone’s already-precarious health continued to decline. Today, Redstone is unable to speak and is looked after by an army of round-the-clock caregivers. Last month, he was put under court-supervised guardianship.

Last year, the Redstones offered Herzer $30 million to go away. She rejected the offer. It’s a move she likely regrets, because now, in Act 3, she’s suffered a serious reversal of fortune. The Wall Street Journal reports that a settlement has been reached that requires Herzer to pay back $3.25 million to Redstone for the gifts she received over the years, and to agree not to file any more lawsuits.

As Shakespeare wrote in King Lear, “The wheel has come full circle.”

Legal battles erupt over far less than $4.5 billion! See a qualified estate planning attorney to devise a thoughtful estate plan, including a plan to protect you from potential financial predators as you age.