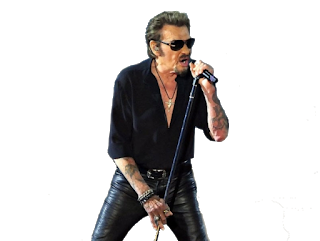 The family feud over the estate of rocker Johnny Hallyday – at least, the first battle in what figures to be a continuing war – has come to a close. And in a sign of the times, Hallyday’s social media account has played a pivotal role. The situation makes clear an emerging reality: what we put online can catch up with us – even when we are gone!

Many Americans aren’t familiar with Hallyday, although he’s been a superstar in France for decades. Intrigued with American rock ‘n roll from a young age, he rose to fame as the “French Elvis,” selling over 100 million records during his career.

The “French Elvis” Dies – in America

In December 2017 the 74-year-old Hallyday died of lung cancer. At his death he had lived in Los Angeles for approximately ten years with his fourth wife, Laeticia, and their two adopted daughters, Jade and Joy. As an expatriate, Hallyday had a long history of locking horns with French taxing authorities, stating in one interview that he might eventually consider returning to France – but only if it changed its tax laws.

The singer obtained his green card in 2014. That same year, he had a California lawyer draft his will. The will left everything to his widow Laeticia. It cut out his biological adult children from four prior marriages, none of whom reside in the U.S. You can do this in America, of course, where there is no legal obligation to leave anything to adult children. Not so in France. There, surviving children are automatically entitled to a piece of their parent’s estate.

Obviously, Hallyday’s adult children were none too pleased that under American law, they were being disinherited. Their father’s estate has been estimated at about $112 million, and consists of rights to his extensive music catalog, several homes, many luxury cars, and even the proceeds from a posthumously issued album that has already sold over a million copies.

Hallyday was mourned in France with all the pomp and circumstance befitting a national hero, including a funeral procession along the Champs-Elysees. Shortly thereafter, his adult children took their grievances to a French court. Laura Smet, 35, and David Hallyday, 52, argued that their father was not a bona fide resident of the U.S. They claimed his will was invalid and French law should prevail – which would make them automatic beneficiaries of his estate. Although wealthy in their own right, the adult children seem motivated beyond money. Smet had sorrowfully noted that under the U.S. will, she would not even inherit the signed sleeve of the album “Laura” that her father had recorded to celebrate her birth.

Social media becomes evidence when the children sue the estate

Hallyday’s and Laeticia’s lawyers countered that because Hallyday had lived in the U.S. for over a decade and enrolled his children in school here, he was effectively a U.S. resident, and that U.S. law should prevail.

However, the lawyers for the French adult children had an ace up their sleeve – an online ace. With access to photos and dates from the Hallydays’ public Instagram accounts, they were able to demonstrate to the court that from 2012 to 2017, Hallyday had spent more time on French soil than on American soil. This included time spent on St. Bart’s, a French island in the Caribbean, as well as the eight months he had been in France for medical treatment just prior to his death.

On May 28 a court in Nanterre handed the adult siblings a victory, ruling that their father’s domicile was France, and French law prevailed. The court stated: “Up to the end he lived a bohemian and nomadic life, but above all a very French life that led him to live… usually in France.” If the ruling stands, there are now five beneficiaries: the two adult children; Laeticia; and the couple’s two young children. Of course France will also benefit, as the ruling allows it to get its hands on the inheritance taxes the estate generates. Hallyday’s lawyers intend to appeal, citing evidence that he and his wife were already planning to apply for U.S. citizenship when he died.

The Hallyday case has implications for how your social media may figure in your estate planning, will contests, and conceivably, a number of other legal issues. For example, if a disgruntled heir argues that you lacked capacity when you signed a will cutting him out, what will your Facebook posts say? Will you have posted any comments, even in jest, referring to your poor memory or “losing it”? Or suppose you relocate from New York and claim that Florida is your domicile, relieving you of paying New York State estate taxes. Will your Instagram account back you up, or betray you as they did Hallyday?

Be careful what you post. This is a whole new world, and this is uncharted territory!