Poorly Drafted Last Will and Testament May Disinherit Longtime Companion 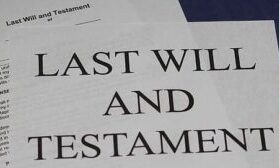 Here is another, and surely not the last example of the perils of an ambiguously worded last will and testament. This story was reported in the September 7, 2019 New York Daily News.

New York City psychologist Jill Morris died in 2016 of breast cancer at age 84. Her companion of 18 years, Joan Anderson, died just twelve days later. Among the assets Morris left behind are two pieces of real property worth millions: a home in Greenwich Village and a home on Long Island.

Anderson’s daughter, Emlie, claims that notwithstanding the poorly worded will, Morris clearly intended for the two homes to pass to her mother. The New York State Surrogate Court disagrees: After weighing the issue, the court recently ruled that the property should not go to Anderson, but to the three charities Morris named as residuary beneficiaries: Doctors Without Borders, Save the Children, and the National Resources Defense Council. The judge noted that Morris and Anderson were never married; had they been, she would have been more inclined to rule in Anderson’s favor. The judge also noted that Morris’ 11-page will was “replete with ambiguous language and numerous errors.” Appallingly, the will was not a do-it-yourself job; it was drafted by Morris’ lawyer, Patricia Harold.

The court’s ruling has not gone over well with Emlie, who will get nothing from the estate if the ruling is upheld. She intends to appeal. She contends that her mother and Morris were effectively married. They refrained from marriage for just one reason, she says: concern for the impact it would have on Morris’ psychology practice. “Nobody is taking into account that the reason they didn’t get married is because they were older and the stigma of being gay was such a big barrier,” she said. “They were the same as a married couple. They even went to marriage counseling, five years in.”

This is yet another case underscoring the importance of getting competent legal assistance when creating your estate plan. In our office, every estate plan we create is double-checked and reviewed by two different attorneys for wording and any other potential errors. Don’t allow an ambiguous estate plan to derail your intentions!