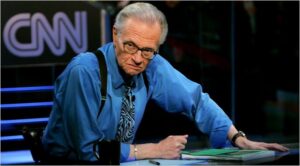 Multiple marriages, divorces, blended families:  These are circumstances that can make it challenging to devise an estate plan that withstands potential claims from disgruntled relatives. And when it comes to marriages, divorces and blended families, few were more familiar with these topics than the late Larry King, CNN’s longtime news host. King was married to seven women during his lifetime – one he even married twice. He was in the process of divorcing his seventh wife, Shawn Southwick King, when he passed away at age 87 on January 23, 2021.

His marriage to Shawn lasted 22 years, the longest duration of his marriages. She was 26 years his junior, residents of California. Shawn and King had two sons together, Cannon and Chance. King filed for divorce in August 2019, describing the couple’s “irreconcilable differences” to People in this way: “We overcame a lot, but it just hit a point where we didn’t get along. The age difference eventually takes its toll. Also my wife is a very religious Mormon, and I’m an agnostic atheist, so that causes little problems.”

King’s death ended those “little problems,” but is generating big, new ones for the family he left behind. This post describes the current status of the King estate; illustrates why guidance from an experienced estate planning attorney is vital; and provides insight into what would occur under similar circumstances if the parties were Florida residents.

A company King co-founded, Ora Media, noted that the late talk show host “liked to ask short, direct and uncomplicated questions.” Short, direct and uncomplicated also describes King’s last will and testament. With just three short sentences scrawled on scrap paper, King cut his wife out of his estate and divided it evenly among his children. His handwritten (holographic) will reads: This is my Last Will & Testament. It should replace all previous writings. In the event of my death, any day after the above date I want 100% of my funds to be divided equally among my children Andy, Chaia, Larry Jr., Chance & Cannon.

King signed the new will on October 17, 2019  –  just two months after he filed for divorce from Shawn. (When he died, only three of the five intended beneficiaries remained: Andy and Chaia died in the summer of 2020 of heart failure and lung cancer, respectively.) His surviving  children are his two sons with Shawn; and a son from an earlier marriage, Larry King Jr.

Would Florida Honor A Handwritten Will?

Different states treat holographic wills differently. For Florida residents reading this, you should know that a handwritten will can be valid in Florida, but only if it is signed by the will-maker in the presence of two witnesses, both of whom must also sign while in the presence of one another as well as the testator. A codicil must meet all the same requirements. Florida Statute 732.502 outlines these requirements.

Wife and Stepson In Court Battle

Larry Jr. submitted his father’s handwritten will to the Los Angeles Supreme Court on February 10, 2020, asking to be appointed administrator of the estate. He claims California’s probate code gives him “clear statutory priority” over Shawn to act as administrator, since at the time of King’s death, their marriage was effectively on its deathbed, too. Larry Jr. points to the fact that his father and Shawn had sold their home; were living separately; and divorce proceedings were underway. His filing states: The Decedent was married to Shawn Southwick King (‘Ms. King’) at the time of death. However, the Decedent and Ms. King were actively involved in ongoing dissolution proceedings in Los Angeles Superior Court. The Decedent and Ms. King were residing separately at the time of death.

In the filing, Larry Jr. lists the many issues that now require attention, including paying his late father’s health aides and other employees; appointing new officers for his father’s companies, LK Productions and Larry King Enterprises; and taking action against those who had begun using his father’s likeness without consent. He estimates King’s estate at $2 million, but the number will likely be far higher once trust assets are calculated.

It took mere days for Shawn to challenge the handwritten will. In papers submitted to the court on February 16, she alleges that the new will Larry Jr. filed with the court is an “ineffective codicil,” for several reasons. First, it violates two postnuptial agreements that prevent King from making testamentary gifts to his children.  Second, she asserts that the only legitimate estate plan is the Larry and Shawn King Family Trust, which she and King set up in 2015. The trust holds the bulk of King’s assets, and she is the sole trustee. As such, and because she has been intimately involved with King’s business affairs for many years, it is she, not Larry, who she argues is the rightful administrator of the estate. Last, Shawn disputes Larry Jr.’s characterization of her marriage:  King never pursued the divorce after filing the initial petition, she notes. Additionally, she and King spoke daily and they would have reconciled had it not been for King’s deteriorating health.

In Florida: Does Divorce or Separation Impact the Surviving Spouse’s Rights?

King and Shawn, California residents, were still legally married when he died. In Florida, a surviving spouse has the right to an elective share of the deceased spouse’s estate, and has certain rights to homestead property, too. Those rights remain in effect even if the spouses are in the process of divorcing and/or are legally separated when one of them passes away. Only a legal dissolution of marriage or a valid pre- or post-nuptial agreement waiving those rights negates the surviving spouse’s rights. Read more about the elective share.

Was King Subjected To Undue Influence?

Shawn also claims that King was of questionable mental capacity in recent years. He had suffered from cardiac problems, a stroke, and cancer, which she argues made him vulnerable to manipulation. She has alleged that Larry Jr. pressured his father into signing the Oct. 17, 2019 will. She also recently discovered that Larry Jr. and his father shared a joint bank account. Through that account, King had given Larry Jr. $266,000, without her knowledge or consent. California is a community property state, and she wants the money returned.

What Constitutes Undue Influence in Florida?

A competent Florida estate planning attorney will be aware of these factors. This is why, for example, we ask our clients to speak with us alone before any friends or relatives in the waiting room are invited into the consultation. This is how we can make sure our client is not being subjected to undue influence. It is important to avoid even the appearance of undue influence.

Whether this is your first marriage or your seventh, whether you are happily married or separated, whether you are in the middle of a divorce or think you may be headed to a divorce or separation: understand that your marital status is intimately connected to the effectiveness of your estate plan. To make sure that your assets end up with the people you want to get them, and to reduce the chances of family discord and an estate challenge, see an experienced estate planning attorney. Contact The Karp Law Firm at 561-625-1100 or klf@karplaw.com.

As for the King estate, stay tuned. Court hearings have been scheduled for February 24 and March 25.