Language In Your Florida Trust Must Be Precise 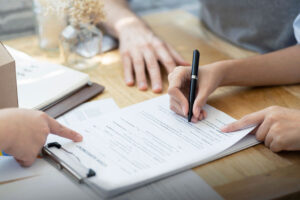 A recent case out of Texas illustrates why the language in your estate planning documents must be crystal clear, and anticipate all future possibilities –  possibilities that may not even be on your radar.  Ambiguous language can result in family conflict and your assets falling into the wrong hands. In the case of Ochse v. Ochse, the word “spouse” – the definition of which seems fairly obvious to most people – opened up a can of legal worms.

Amanda H. Ochse created an irrevocable trust in May 2008. She was not married. Her only child, William Ochse III, was at that point, married to Cynthia Ochse. The trust called for distributions to be made to William and his “spouse,” but she was never identified by name as a beneficiary. William was named the initial trustee. He and Cynthia had two children: a daughter, Chloe Ochse and a son, William Ochse IV.

In 2012, William and Cynthia’s 30-year marriage ended in divorce. Three years later, he married Carol. Which brings us to the ensuing legal question: What was his mother’s intent when she used the word “spouse” in her irrevocable trust?  Did she mean Cynthia, the woman her son was married to at the time she signed her trust? Or did she intend the word  “spouse” to refer to a class of individuals, meaning anyone her son might be married to in the future?

In November 2020, Chloe and her brother, William IV, along with their mother Cynthia, initiated a lawsuit against the father in his capacity of trustee of the trust. They argued that he had failed to honor his fiduciary duties because he was not providing any trust funds to Cynthia, his spouse at the time the trust was created, and therefore, he should be removed as trustee. Amanda’s irrevocable trust, they argued, made it clear that the term “spouse” referred not to Carol, William III’s current wife, but to Cynthia: his ex-wife, the spouse at the time the trust was executed.

William III and his new wife Carol filed a competing motion. They argued that Carol was the rightful spouse under the trust because the term spouse was descriptive of a status, not a specific individual.

In the end, after an appeal of an earlier decision, the court found that the language in the trust was unambiguous, and the court would not look beyond the “four corners” of the instrument – in other words, the court would only look at the instrument itself, and not consider any outside testimony to determine the grantor’s intent. The first wife, Cynthia, and her children prevailed. The court determined that in this case the term “spouse” was unambiguous and should be interpreted to mean the individual to whom William was married at the time the trust was signed.

I (Attorney Joseph Karp) respectfully disagree with the court. I find the word “spouse” in this trust to be very ambiguous! Had our law firm drafted this instrument, depending on the trust maker’s intent, we would have either identified the spouse by name, or would have indicated “spouse” meant whomever was William’s spouse at the time distributions were made. Furthermore, we would have indicated whether divorce would terminate William’s first wife’s rights under the trust – even if he did not remarry.

It is of the utmost importance that your estate planning documents are drafted by a competent Florida estate planning attorney who will pay careful attention to all the terminology in your documents, and ensure that no ambiguity creeps in. That way, you can be confident your wishes will be honored. The attorneys of The Karp Law Firm are here to assist you. Contact us at 561-625-1100 or email klf@karplaw.com.