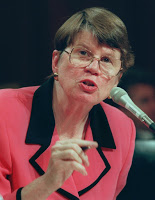 You probably think that the estate plan of one of the nation’s most prominent legal authorities would be absolutely airtight.

But you would be wrong.

Janet Reno was appointed U.S. Attorney General by President Clinton, the first woman to serve in that role. Raised in Miami, Reno subsequently ran an ultimately unsuccessful campaign for the Florida governorship. She died as a result of Parkinson’s Disease in 2016, age 78. She had no husband or children. Her revocable trust listed her seven nieces and nephews as beneficiaries, and named one of them, James Hurchalla, as her successor trustee.

The beneficiary rejected the inheritance

Reno’s estate plan gave special consideration to her longtime Dade County home. A unique piece of property amidst suburban sprawl, the rustic ranch home was built by hand by Reno’s mother in the 1940s. It sits on four acres of undeveloped land, can be reached only via a dirt road, and is hidden from view by thick vegetation. Reno’s estate plan bequeathed the property to the University of Miami, on the condition that it preserve the property and keep it undeveloped.

Just one problem, and a big one: The University of Miami did not want it. The school determined it was too expensive to maintain.

Because Reno failed to include alternative arrangements for the property, her successor trustee sought out another educational institution for the bequest. Miami-Dade College, located just a quarter mile from the ranch, agreed to take the property and preserve it as Reno had specified. The Miami-Dade Circuit Court approved the substitution, stating: “…If a particular charitable purpose becomes unlawful, impracticable, impossible to achieve, or wasteful, the court may…modify or terminate the trust. … in a manner consistent with the settlor’s charitable purposes.”

But now another problem: One of Reno’s beneficiaries, her niece Janet M. Reno, wasn’t on board with the decision to give the property to Miami-Dade College. She argued that since the property will not pass precisely as Reno originally intended, it must be sold and the proceeds distributed to the nieces and nephews. She took her case to the Miami-based Third Court of Appeals, but it ruled against her in August 2019, finding that substituting a different school was in conformity with her aunt’s intent: “The University of Miami’s declination to accept the charitable transfer made the original disposition impossible to achieve. But the successor trustee identified an even closer charitable, educational institution to accept the gift and to comply fully with Ms. Reno’s conditions ‘in perpetuity,’ respecting the ‘unique character’ and ‘historical importance’ of the Reno homestead.”

That is not the end of it, however. Late last year Reno took her case to the Florida Supreme Court. She claims that once her aunt died, the trust became irrevocable, and the terms cannot be changed. In other words, Miami-Dade College may not substitute for the University of Miami. Her attorneys write of the lower court’s decision: “The opinion if allowed to stand would allow Florida courts and fiduciaries to alter the testamentary intent of Floridians after they pass away thereby eroding their constitutional right to freely devise their assets. The issue is of great public importance to the people of our state, with its high population of elderly citizens, as well as the trust and estate bar.”

So what happens now? The Reno family waits for a decision. And the rest of us get a lesson in why one’s estate plan must be precisely worded and cover all possible scenarios, whether you’re a regular citizen or a U.S. Attorney General.