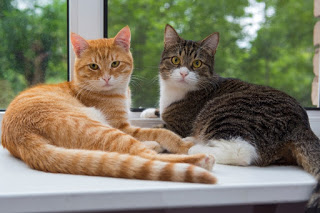 Thanks to their devoted late owner, two cats have more than enough money to last their nine lives.

New York resident Ellen Frey-Router died in 2015 at age 88. Her will specified that $300,000 of her approximately $3 million estate was to go to her beloved felines, Troy and Tiger. She left instructions for their care that included regular grooming and veterinary visits, and specified that they must “never be caged.” She named two of her health aides to care for the cats and manage their money. Troy now lives with Rita Pohila. And Tiger, once a stray, has “retired” to Florida with Dahlia Grizzle, who says he’s “a wonderful cat.”

Frey-Wouter had worked for the United Nations. Her husband predeceased her and the couple had no children. Her only relative, a sister who lives in the Netherlands, will receive any monies left over after the cats pass away. Most of Frey-Wouter’s estate went to her lawyer, several charities and her home health aides.

Troy and Tiger’s inheritances are modest compared to some cases that made headlines in recent years. Hotel magnate Leona Helmsley left her Maltese $12 million and nothing to her family, although a judge later pared down the dog’s inheritance to “just” $2 million. Wealthy Miami Beach resident Gail Posner, daughter of leveraged buyout king Victor Posner, left her dog $11 million, and her son, Brett Carr, $1 million. Stockbroker Muriel Siebert left $100,000 for the care and maintenance of her chihuahua.

But by all accounts, the world’s richest canine heir is Gunther IV. The German Shepherd inherited his fortune from his sire, Gunther III – who inherited his fortune from his deceased owner, German Countess Karlotta Liebenstein. Liebenstein’s original bequest was $80 million, but with wise investments, the pooch’s portfolio now stands at about $400 million.

These ridiculous sums aside, many people provide for their pets in their estate plans to ensure that a pet that outlives them does not end up in a shelter, on the street or euthanized. Florida law since 2003 has allowed pets to be named as beneficiaries. Talk to our estate planning attorneys about making arrangements for your pet.