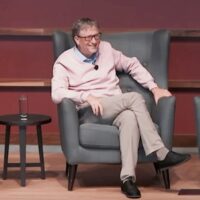 Bill Gates has taken on a new mission: defeating Alzheimer’s Disease. And he’s approaching it with the same out-of-the-box thinking that led him to create Microsoft. He recently contributed $50 million of his own money (not his foundation’s) to the project.

The philanthropist’s father just turned 92 and is doing well, but as Gates notes, he is one of the lucky ones: Statistics show that if one makes it to age 80, the chances of developing the disease are about 50%. And Alzheimer’s is the only one of the top ten causes of death in the U.S. for which there is no effective treatment or cure. That’s a fact that does not sit well with Gates’ inner innovator.

After studying the tremendous emotional and financial toll the disease takes on families and society, Gates decided to plow $50 million into the Dementia Discovery Fund. The fund is a unique collaboration of industry, charity and government, based in the U.K. While most research into Alzheimer’s focuses on the two proteins which seem to be involved with Alzheimer’s, amyloid and tau, the Dementia Discovery Fund is examining other disease pathways and more unconventional treatments. Writes Gates: “We’ve seen scientific innovation turn once-guaranteed killers like HIV into chronic illnesses that can be held in check with medication. I believe we can do the same (or better) with Alzheimer’s.”

Several of his own family members succumbed to the disease. “I know how awful it is to watch people you love struggle as the disease robs them of their mental capacity,” he notes in his blog, “and there is nothing you can do about it. It feels a lot like you’re experiencing a gradual death of the person that you knew.”

Unlike Gates, most American families lack sufficient financial resources to care for loved ones affected by Alzheimer’s Disease. Many still believe that Medicare covers the cost of long-term care; discovering it does not is a frightening wake-up call for many Americans. Without generous long-term care insurance, middle class families are turning to other solutions, like Medicaid and Veterans benefits, or risking the loss of everything they’ve worked for.

Kudos to Bill Gates. We hope his efforts will open new “windows” into this dreaded disease, and eventually, lead to an effective cure or treatment. We really need the breakthrough.

To read about Medicaid benefits and Veterans benefit for long-term care, click here.

Find out more about the Dementia Discovery Fund.