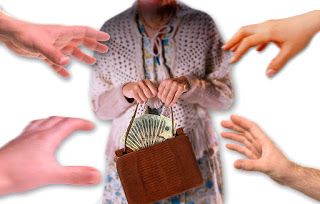 We frequently remind blog readers of two important planning steps to take: First, get guidance from a Florida Bar Certified Elder Law Attorney when pursuing long-term care Medicaid benefits. Second, make plans to avoid court-ordered guardianship in the event of disability. Frances Berkowitz, now 86, did neither. Her story, reported in the Palm Beach Post on December 11, 2016, is a sad and complicated one, with lessons for the rest of us.

In 2012, Berkowitz’ late husband Jerry was in the final stage of his battle with cancer. In order to access Medicaid benefits and preserve some of the $1.2 million in assets the frugal couple had scrimped and saved over the years, they turned to Princella Lewis, a “life care consultant” they had been referred to by the nursing home Jerry resided in. Lewis charged them a $55,000 fee for the Medicaid application. In addition, she directed Frances to cash in the couple’s bonds and certificates of deposit and to put them into accounts under the name of Lewis’ firm, Prestigious Lifecare for Seniors. Lewis also had the couple name her as their agent under their durable powers of attorney, and as their health care decision maker.

The Berkowitzes became uneasy with these steps. Increasingly alarmed, they ultimately sought legal help to recoup the money they’d given Lewis. They ended up recovering $835,000, with another $312,000 still to be paid to them. Sadly, Jerry died in 2013 and never saw the money. In court documents, he expressed a final wish: that Lewis be held accountable. “How could you rob two sick old people out of their life savings?” he asked.

After the initial $835,000 payout, Berkowitz reportedly said she no longer cared about the additional monies owed her and said she wanted to end her life. Concerned about her mental capacity, the lawyers who had helped her with the Lewis case, Webb Millsaps and Donna Solomon, petitioned the court to appoint a guardian for Berkowitz. In January 2015 a guardian was appointed: Elizabeth Savitt. And that is when Berkowitz became a victim yet again, claim Millsaps and Solomon.

The lawsuit they brought against Savitt requests that she be replaced as guardian, alleging that she has been responsible for “wasting, embezzlement and mismanagement” of Berkowitz’ funds. The suit alleges that when Savitt took over as Berkowitz’ guardian, Berkowitz had $400,000, money Savitt has yet to account for. However, Savitt’s attorneys claim Berkowitz had only $15,000. The lawsuit against Savitt also claims she settled for the balance of the money owed Berkowitz for mere pennies on the dollar. Reporters from the Palm Beach Post have noted that Savitt paid off a $308,000 foreclosure judgment on her own home shortly after being appointed guardian. Nonetheless, Circuit Judge Howard Coates, who is handling the case, has as yet declined to relieve Savitt of her duties, stating that both sides’ accusations are “conclusions based on smoke, but no fire based on fact.”

The problems of elder abuse in the Florida guardianship system have come under intense scrutiny lately. Reforms have been introduced and more are likely on the way. And while there are far more responsible guardians than not, it is prudent to make plans so that you don’t fall into the system should you become incapacitated. A smart plan should include at least a durable power of attorney, health care surrogate and possibly, designation of a pre-need guardian.

As to how to go about Medicaid planning: Relying as Berkowitz did on someone without the appropriate experience and knowledge can not only fail to secure benefits and waste your money; if transfers are improperly handled, you may even be vulnerable to charges of fraud. Always seek the guidance of a Florida Bar Certified Elder Law Attorney.