A Veteran With a Sky-High Mission! 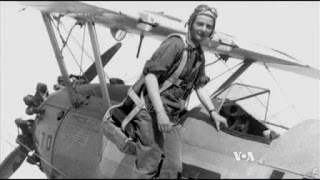 All our clients have interesting life stories. Many of them are veterans. With Veterans Day around the corner, I want to share the fascinating story of one of our many clients who served with dignity and dedication. With her permission, I present to you the remarkable Bernice “Bee” Haydu.

I had the privilege of meeting Mrs. Haydu in 1994, when she and her late husband Joseph came to the Karp Law Firm for legal advice. Now 97 and two decades on from our original meeting, Mrs. Haydu remains our client and as vibrant as ever.

After graduating from high school in New Jersey in the 1930s and working as a secretary, Mrs. Haydu (nee Falk) was eager for more adventurous pursuits. Her brother was in the Army Air Corps, and she wanted to be active in the war effort, too. She took flying lessons, a fateful decision. World War II began in 1941, and there was a shortage of pilots.  At the urging of Jacqueline Cochran, the Womens Airforce Service Pilots (WASP) was established. When Haydu learned the program was looking for recruits, she wasted no time in applying. Of 25,000 applicants, she was one of just 1,803 women who were accepted; and one of only 1,074 who successfully completed training.

After seven months of military training (the same as that of male cadets), she was sent to the Training Command as an Engineering Test Pilot and Utility Pilot. Among her tasks was flying and testing overhauled aircraft and ferrying military personnel from location to location across the country. Although the work of a WASP was considered non-combat, the job was not without perils. Thirty-eight women were killed during the program.

Yet even with the dangers and their dedication, the WASPs were not considered official members of the military. Haydu and her colleagues were classified as civilian volunteers, and denied the benefits afforded to military personnel. They were required to pay their own way to Texas for training as well as return flights. And when a WASP died in the line of duty, the family even had to pay to have the body sent home.

The WASPs had been led to believe that once the program disbanded, they could continue their aviation careers and would be welcomed into the military. Sadly, political opposition prevented that from happening. When the war ended, the women went back to their prewar lives. Well, most of them did. Haydu remained passionate about flying. Her post-war life included working as a flight instructor – and even marrying Joseph, an aviator also.

She took on another job, too. As the years went by Haydu increasingly set her sights on another sky-high mission: getting recognition for the WASP’s contribution to the war effort, and securing veterans benefits for them, as they had been promised if the program was successful, which it was. After decades of organizing her fellow ex-WASPs, making public appeals and nonstop lobbying, her efforts bore fruit in 1977. That is the year President Jimmy Carter signed the GI Bill Improvement Act, which included a provision to award the WASPs veteran status and give them the corresponding veterans benefits.

But that was just the beginning. More recognition was in store for the WASPs, and for Haydu in particular. In 2009, Congress passed a bill that awarded the WASPs the Congressional Medal, the nation’s highest civilian honor. There were about 300 surviving WASPS at that time. Haydu and several of her fellow WASPs went to Washington to mark the occasion. She was personally greeted by President Obama. She says she had the honor of actually pulling out his chair for him as he seated himself at his desk to sign the bill. In his statement, President Obama said: “The Women Airforce Service Pilots courageously answered their country’s call in a time of need while blazing a trail for the brave women who have given and continue to give so much in service to the nation since. Every American should be grateful for their service, and I am honored to sign this bill to finally give them some of the hard-earned recognition they deserve.”

Other honors have piled up, too. Haydu was on hand in 2008 for the opening of the “Fly Girls of World War II” exhibit at the Women in Military Service for America in Arlington, Virginia. She received an Honorary Doctorate Degree from Vaughn College of Aeronautics and Technology in New York City. In 2012 she was inducted into the Women in Aviation International Pioneer Hall of Fame. And this year, she traveled to New Orleans to receive the 2018 Silver Service Award from the National World War II Museum in recognition of her work in the WASPs as well as her fight for gender equality.

Mrs. Haydu also wrote a book. “Letters Home:1944 -1945,” is a compendium of the letters she wrote home while serving as a WASP. Thank goodness her mother saved them! The book may be purchased through her website.  Haydu is currently working on her second book.

And if you’re ever visiting the National Air and Space Museum in Washington, take a look around on the second floor: you’ll find Mrs. Haydu’s WASP uniform on display.

We thank Mrs. Haydu and all veterans for their service to the country. You can learn more about the history of the WASPs at the website of the National WASP World War II Museum in Sweetwater, Texas.

For information about veterans Aid and Attendance benefits that can help aging and disabled veterans pay for the care they deserve, check out our web page. (The benefits program has just changed its eligibility requirements.)