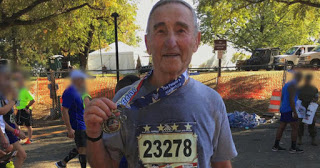 Nat Shaffir has seen more than most. A lot more. Born in 1936 in Romania, he later managed to escape Nazi-occupied Europe. He was shot at while serving as a paratrooper in the Israeli army. He made his way to the United States. At the age of 65, Shaffir took up running marathons. He has run 11 so far and hopes to complete another race this year.

As one of the youngest Holocaust survivors, he volunteers at the U.S. Holocaust Museum in Washington, D.C., telling his own story and the story of so many who, unlike him, didn’t survive. “I’m their voice,” says Shaffir.

Shaffir is a hero and an outstanding volunteer. There are more like him among us. In May, the Karp Law Firm will help sponsor the Palm Beach County Area Agency on Aging’s Prime Time Awards, honoring outstanding senior volunteers in our own communities, including Palm Beach, Martin, St. Lucie, Indian River and Okeechobee counties. When nominations open up, we’ll share with you how to nominate your own hero volunteers.

For now, check out Nat Shaffir’s biography on the U.S. Holocaust Memorial site.