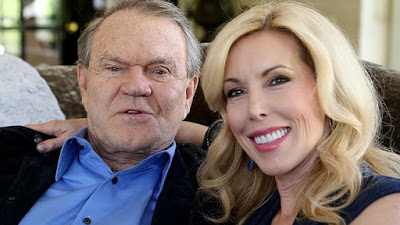 As reported in a 2013 post, acclaimed country music singer-songwriter Glen Campbell was diagnosed with Alzheimer’s Disease in 2011. This was not entirely a shock to his fans, who had noticed the Rhinestone Cowboy forgetting lyrics during performances. At home, he had begun getting lost while driving well-known routes he’d traveled for years.

Campbell, his wife Kim and children never hid the diagnosis. On the contrary, they leveraged Campbell’s high profile to bring attention to the disease.  In 2013 the Grammy Award-winning musician and his daughter testified in front of a U.S. Senate Subcommittee, explaining how the disease was impacting them and urging legislators to support research.

Kim, Cambell’s wife of 34 years, cared for her husband at home until she found her strength rapidly decreasing and her worries about his safety increasing. She was always on alert to make sure he didn’t fall down the stairs in their home. Eventually, he would no longer allow himself to be bathed. So, in 2014, the family decided that Campbell would be better cared for at long-term care facility in Nashville.

Now, six years after diagnosis, Kim has provided USA Today with an update on both of them. Unsurprisingly, Kim suffers from depression, but tries to remain socially and physically active. She writes a blogthat provides information and support for caregivers. She visits Campbell, now 80 years old, nearly every day. He has declined significantly and is in the last phase of the disease. (The average life span after an Alzheimer’s diagnosis is 2 to 8 years.) He is no longer able to play the guitar or sing. He is aphasic and can only utter a few words. When his daughter Ashley visits, she plays the guitar and sings for him. “You Are My Sunshine” seems to be one of his favorites. Kim credits her husband’s musical mind for holding off the worst of his symptoms for a longer time than is usual, since music “sparks the brain.”

The most expensive disease

According to the Alzheimer’s Association’s 2017 report, Alzheimer’s is the most expensive disease in America. Our Florida elder law attorneys meet regularly with families struggling to stay afloat financially while shouldering the cost of a loved one’s long-term nursing care. According to the Alzheimer’s Association, spending on Alzheimer’s and other dementias will be $259 billion this year, and $1.1 trillion by 2050 if no cure or treatment is found. Every 66 seconds, someone in America develops the disease. If we had a treatment that could delay the onset by just five years – not cure it, just delay it – Medicare spending could be reduced by almost half in 2050.

The Campbell family’s journey is especially timely now, as funding for the research they championed may be in the crosshairs. The National Institutes of Health (NIH), responsible for conducting and coordinating Alzheimer’s research with other organizations, is facing a $5.8 billion cut under the White House’s proposed budget, America First: A Budget Blueprint to Make America Great Again. While there was bipartisan support for a 2017 congressional appropriations bill to increase funds for Alzheimer’s research, there is no guarantee that this area of research will be insulated from the proposed cuts. Any cuts could certainly slow progress toward the goal of having a cure or treatment by 2025, says Bruce Lamb of the Indiana School of Medicine. And the organization USAgainstAlzheimer’s notes that starving Alzheimer’s research could spell disaster for America’s fiscal future. If you support robust funding to find a cure or treatment, be sure to let your representatives and senators know!

If you have a loved one with Alzheimer’s, consult our lawyers about how you may be able to tap into Medicaid and/or VA benefits before you lose everything to a nursing home. Even if you are healthy now, we can help you prepare in case disability strikes in the future.

Let’s all keep working toward a world without Alzheimer’s!