Kirk Douglas, Leading Man On and Off Screen, In Life and Death 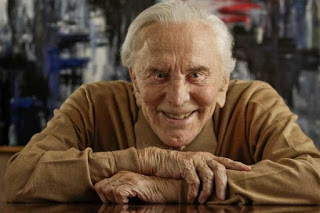 Silver screen icon Kirk Douglas passed away on February 5 at the age of 103. He left behind his wife of 65 years, Anne; three sons, Michael, Peter and Joel; several grandchildren and one great-grandchild. Douglas was as spectacularly charitable in death as he was in life, leaving most of his $80 million estate to charity.

Born Issur Danielovitch, Douglas was one of seven children raised by impoverished immigrants from present-day Belarus. He grew up in Amsterdam, New York, a small town near Albany. His father Herschel was unable to find work at the town’s mills because they did not hire Jews, and turned to making a living as the town “ragman,” collecting and selling junk. Despite these humble circumstances, Douglas recalled that his mother, Bryna, was generous: “Sometimes we didn’t have enough to eat, but very often there would be a knock at the door and it would be a hobo wanting food, and my mother always gave them something,” he said in a 2015 interview. “My mother said to me, ‘You must take care of other people.’ That stayed with me.”

He estimated that he had no less than 40 jobs before his film career took off, including washing dishes and delivering newspapers. He served in World War II as a communications officer of Patrol Craft 1139, and was injured in an accidental explosion. His later years were no walk in the park, either: in 2004 he lost his son Eric to an accidental drug overdose; suffered a debilitating stroke that impaired his speech; and was seriously injured in a helicopter crash.

Most of his estate will now go to the Douglas Foundation, a non-profit that he and Anne established in 1964. It is one of the entertainment industry’s oldest and largest non-profits. Its website states of its founders: They wanted to give back – not only in thanks for their many blessings, but as a means of teaching their children and grandchildren the lessons they had learned. The Douglas Foundation’s principal goal is to help those who cannot otherwise help themselves. Anne still serves as the organization’s managing trustee.

Among the foundation’s beneficiaries are The Children’s Hospital of Los Angeles; a scholarship for underprivileged students at St. Lawrence University, Douglas’ alma mater; the Kirk Douglas Care Pavilion, part of an Alzheimer’s facility that serves the entertainment industry; The Kirk Douglas Theater in Culver City, nurturing young talent; the Kirk and Anne Douglas Childhood Center; the Kirk Douglas High School that helps at-risk youth finish their education; and the Anne Douglas Center for Homeless Women, focused on assisting women dealing with addiction. In his later years he and Anne spearheaded a campaign to build 400 playgrounds in Los Angeles.

Although Douglas never won an Oscar for his many films, he did receive the Presidential Medal of Freedom Award, a Kennedy Center Honors Award, the Jefferson Award for Public Service, and the French Legion of Honor.

He reportedly left nothing to his son Michael, the actor/producer and the most well-known of his three sons. But that does not reflect a family rift: Michael is said to be worth $300 million, doesn’t need the money, and he and his father had a loving relationship. We do not know what if he left anything to his two other sons, all of whom are involved in the movie business.

Anne Douglas recalls that in 2015, reflecting on the money he had amassed, her husband told her: I want to give it all away. And he has. A “leading man,” in life and death.