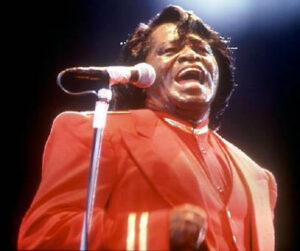 James Brown, aka the “Godfather of Soul,” died at age 73 on Christmas day in 2006. One of the first 10 inductees into the Rock & Roll Hall of Fame, Brown’s signature songs include “I Feel Good,” “Papa’s Got A Brand New Bag” and “Living in America.”  Seventeen of his singles hit #1 on the Billboard charts.

Brown may be resting in peace, but not so the family he left behind. Since his death they have been mired in lawsuits, battling over the entertainer’s estate and control of his music copyrights. He left behind a will that earmarked $2 million for his grandchildren’s education, and directed his personal property to be divided among six of his children. The rest of his estate was to fund the I Feel Good charitable trust, to provide scholarships for underprivileged children in South Carolina and Georgia. He left nothing to his then-wife, Tomi Hynie. As you can imagine, the arrangement did not sit well with his family, who filed numerous lawsuits over the last fifteen years in an attempt to set aside the provisions of his will and cash in on the estate.

Brown’s family circumstances were complicated, and his family members far from unified. That’s putting it mildly. He had four marriages, children from those marriages, as well as children from  extramarital affairs, some of whom he acknowledged. Warring family members could not even agree on what to do with his body after he died; it was left at a funeral home for two months until they reached an agreement on where and how to bury him.

Playing the highest profile role in all the legal wrangling was his fourth and last wife, Tomi Hynie, a former Janis Joplin impersonator and backup singer for Brown. They married in 2002. Unbeknownst to Brown at that time, Hynie was still married to another man, Javed Ahmed. But wait, there’s more: Ahmed was a married man when he married Hynie, with three wives in his native Pakistan. Brown subsequently sought an annulment of the marriage to Hynie, but never followed through and the annulment never happened.

Brown left nothing to Hynie in his will. She sued the estate, asking for one half. Her son, James Brown II, asked for one seventh. The logic behind her claim: When she married Ahmed, he was already married and therefore, her marriage to Ahmed was not valid. Since she was not legally married to Ahmed, her marriage to Brown was valid. Her case, as well as that of Brown’s other children’s, ended up in the South Carolina Supreme Court. In 2013, it ruled against Hynie, saying she was not Brown’s legal spouse and therefore not entitled to a portion of his estate. The court also ruled that Brown’s children could not overturn the provisions of his will.

The Estate Is Sold

Now, it looks like the battle is drawing to a close. In December 2021, Primary Wave, a New York song catalog marketing company, paid $90 million for all the estate’s assets, including Brown’s music rights, real estate, and control over Brown’s name and likeness. The company is talking about turning Brown’s riverside mansion on Beech Island, South Carolina into a tourist mecca similar to Elvis’ Graceland. The company has also mentioned the possibility of a Broadway show based on Brown’s life and musical legacy. The only beneficiaries of the estate are the trust for his grandchildren’s education, which will get $2 million as specified in his will; and the I Feel Good Charitable Trust, which will get the rest. After fifteen years, it looks like James Brown’s charitable vision is on its way to becoming reality.